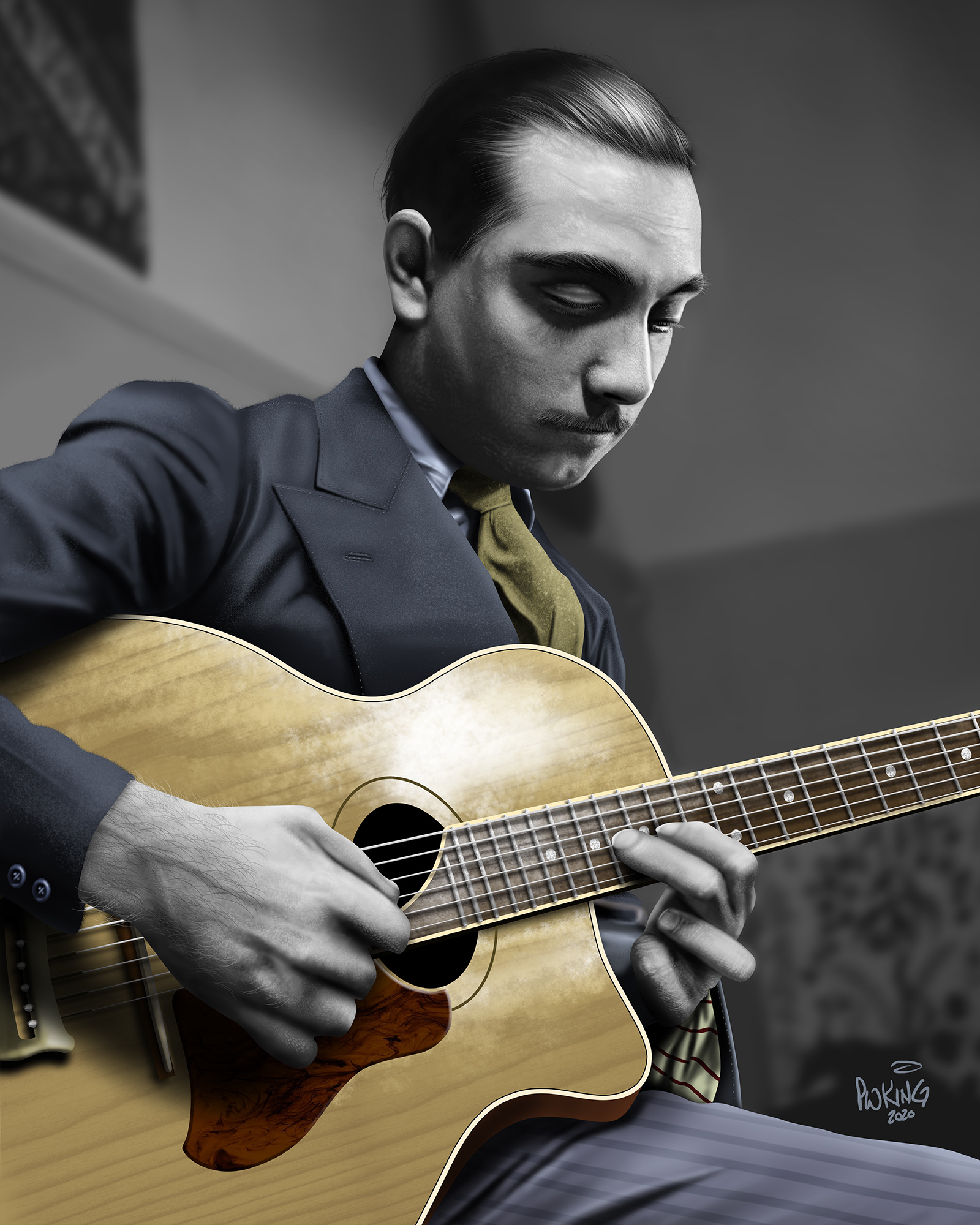 Reinhardt was a Belgian-born Romani French jazz guitarist, musician and composer, regarded as one of the greatest musicians of the twentieth century.
He was the first jazz talent to emerge from Europe and remains the most significant.

At this time he played a guitar made by Siro Burgassi and Gino Papiri. The guitars were branded under the mark S&G or Siro and Gino. There were very few of them made and they were instruments of the highest quality. He later played Selmer Guitars.

Reinhardt spent most of his youth in Romani Gypsy encampments close to Paris, where he started playing the violin, banjo, and guitar. At the age of 17 Reinhardt married Florine “Bella” Mayer, a girl from the same gypsy settlement.
He nearly lost his life when the caravan he and his wife lived in caught fire when he knocked over a candle on his way to bed. Reinhardt dragged himself and his wife through the fire to safety, but suffered extensive burns on his left hand and other areas. He received first- and second-degree burns over half his body. His right leg was paralyzed, and the fourth and fifth fingers of his left hand were badly burned. Doctors believed that he would never play guitar again.
Two of his fingers remained paralyzed. By sheer will, he taught himself to overcome his now permanent handicap by using only his thumb and two fingers. With rehabilitation and practice, he re-learned his guitar craft in a completely new way. He played all his guitar solos with only the index and middle fingers and used the two injured fingers only for chord work.

With violinist Stéphane Grappelli, Reinhardt formed the Paris-based “Quintette du Hot Club de France” in 1934. The group was among the first to play jazz that featured the guitar as a lead instrument. Reinhardt recorded in France with many visiting American musicians, including Coleman Hawkins and Benny Carter, and briefly toured the United States with Duke Ellington’s orchestra in 1946.

The Allman Brothers Band song “Jessica” was written by Dickey Betts in tribute to Reinhardt. Jazz guitarists in the U.S., such as Charlie Byrd and Wes Montgomery, were influenced by his style.

In May 1953, while walking home after playing in a Paris club, he collapsed outside his house from a brain hemorrhage. Reinhardt was declared dead on arrival at the hospital in Fontainebleau, at the age of 43.