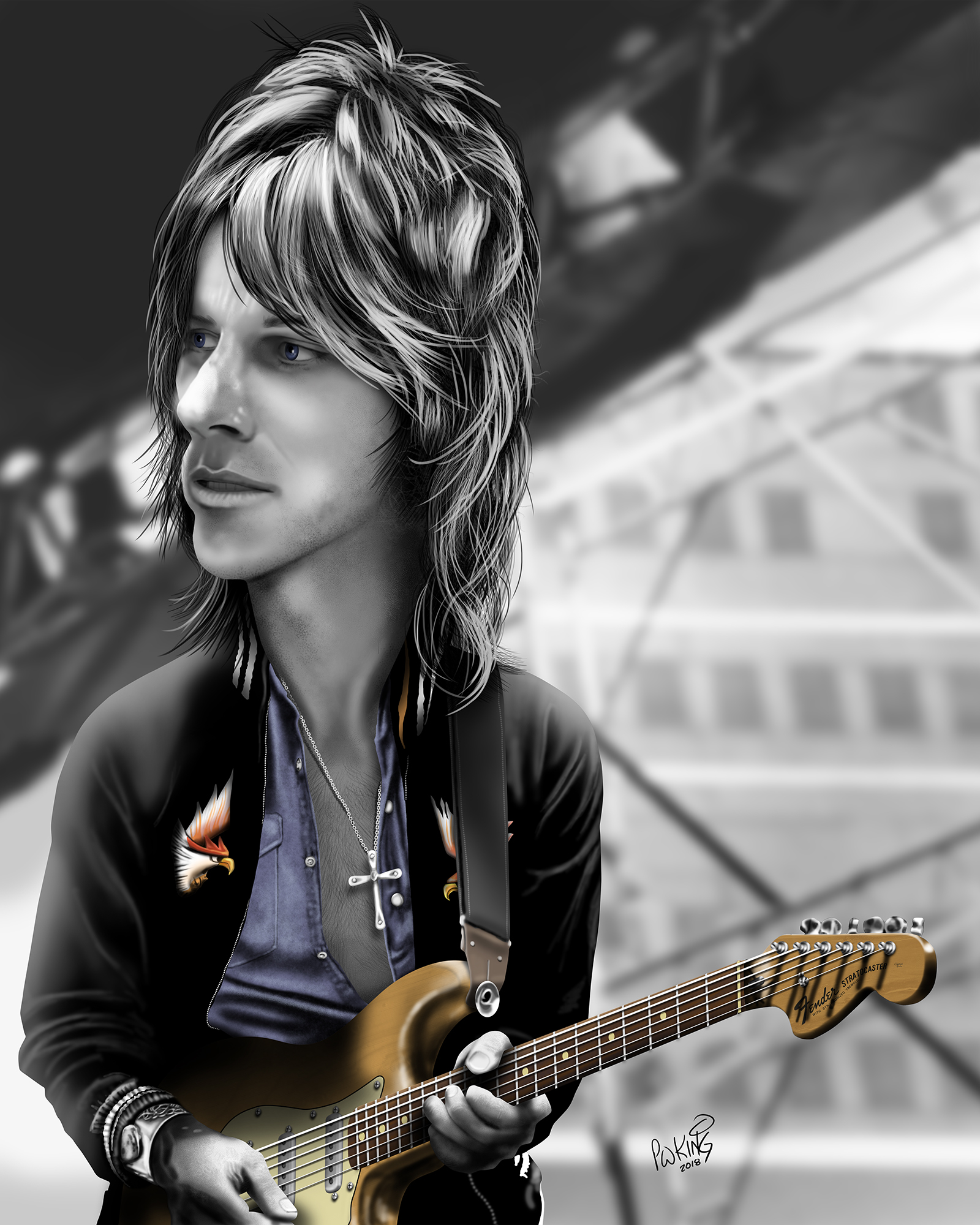 Jeff Beck Caricature. Shown here performing on stage at the Day on the Green Show #3, at the Oakland Coliseum Stadium, Jun 5, 1976, with his 1954 Fender Stratocaster at age 32.

Other performers that day: Boz Scaggs, Tower of Power, Santana, Journey, and Nils Lofgren.
Day on the Green is a recurring concert in Oakland, California, presented by promoter Bill Graham and his company “Bill Graham Presents” since 1973.

Jeff Beck is an English rock guitarist. He is one of the three noted guitarists to have played with The Yardbirds (the other two being Eric Clapton and Jimmy Page). Beck also formed The Jeff Beck Group and Beck, Bogert & Appice.
He was ranked fifth in Rolling Stone's list of the “100 Greatest Guitarists of All Time” and the magazine, upon whose cover Beck has appeared three times, has described him as “one of the most influential lead guitarists in rock”.
Much of Beck's recorded output has been instrumental, with a focus on innovative sound, and his releases have spanned genres ranging from blues rock, hard rock, and an additional blend of guitar-rock and electronica. Beck has been inducted into the Rock and Roll Hall of Fame twice: as a member of the Yardbirds (1992) and as a solo artist (2009).
Beck's sister Annetta introduced him to Jimmy Page when both were teenagers.

His breakthrough came in 1965 when he replaced Eric Clapton in the Yardbirds on the recommendation of his childhood friend Jimmy Page, who also joined the band shortly after.

Beck stopped using a pick in the 1980's. He produces a wide variety of sounds by using his fingers and the vibrato bar on his signature Fender Stratocaster, and he frequently uses a wah-wah pedal both live and in the studio. Eric Clapton once said, “With Jeff, it's all in his hands”.

Jeff is also a lover of Ford Classic Hot Rod cars, of which he owns quite a collection. He not only drives them, but works on the mechanical stuff himself.