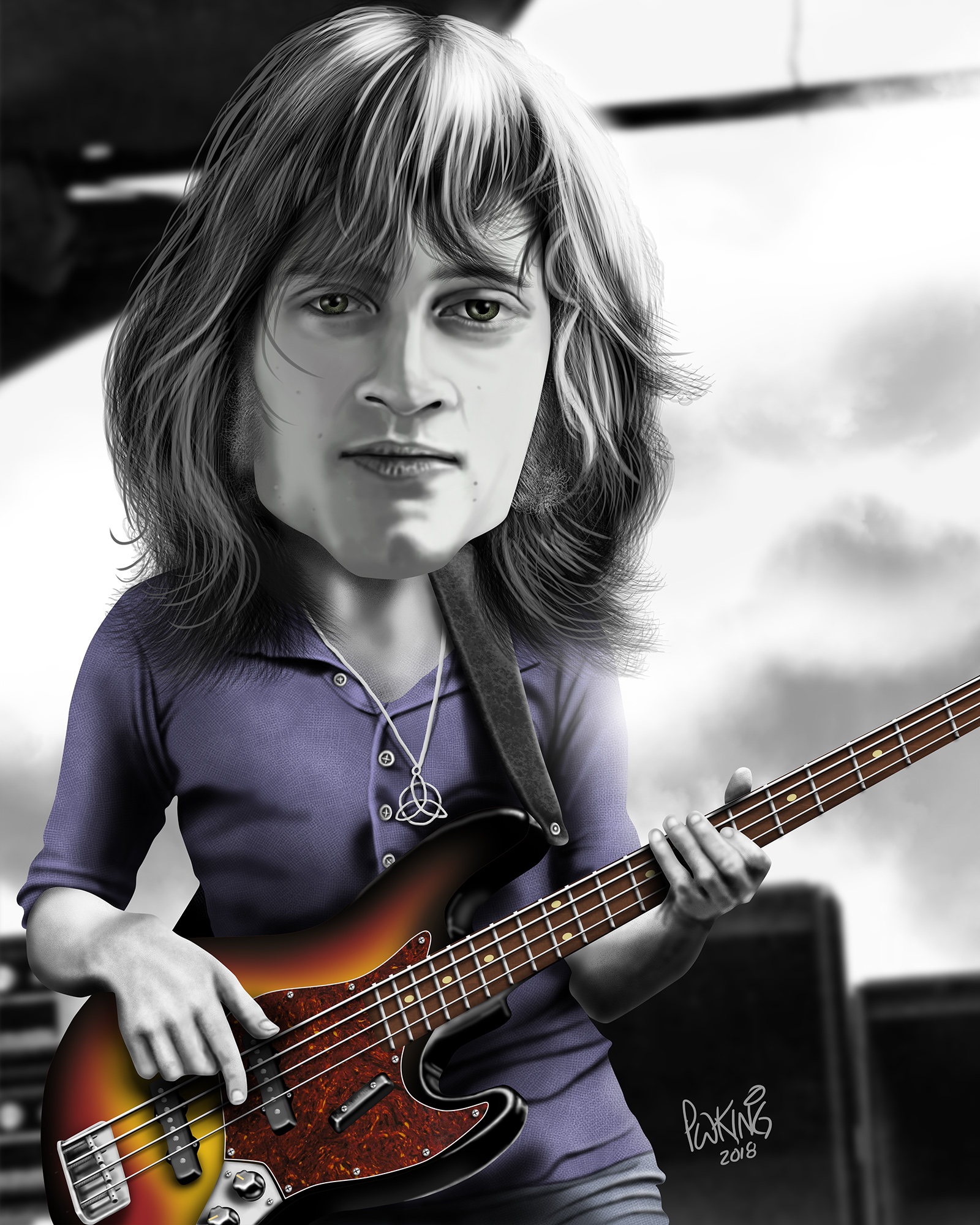 John Paul Jones Caricature, (real name: John Richard Baldwin) age 26, shown with his 1962 Fender Jazz Bass at the Led Zeppelin concert in Sydney, Australia, February 27, 1972, during the Zoso (Led Zeppelin's 4th Album) tour.
The Zoso album (released November 8, 1971), featured many of the band's best-known songs, including “Black Dog”, “Rock and Roll”, “Going to California” and “Stairway to Heaven”. The album is one of the best-selling albums of all time with more than 37 million copies sold.

From 1964 to 1968, Jones was a session player for Decca Records. During that time, he worked with numerous artists including the Rolling Stones on “Their Satanic Majesties Request” (Jones' string arrangement is heard on “She's a Rainbow”); Herman's Hermits; Donovan (on “Sunshine Superman,” “Hurdy Gurdy Man,” and “Mellow Yellow”); Jeff Beck; Françoise Hardy; Cat Stevens; Rod Stewart; Shirley Bassey; Lulu; and numerous others.
In 1968, Jones was asked to join the newly formed band, Led Zeppelin, by founder Jimmy Page. Jones was responsible for the classic bass lines of the group, notably those in “Ramble On” and “The Lemon Song” (Led Zeppelin II), and shifting time signatures, such as those in “Black Dog” (Led Zeppelin IV). Jones and John Bonham were both huge Motown and Stax fans and general soul music fans, including James Brown.

The necklace symbol shown around his neck, is a triquetra, an ancient Indo-European three-pointed symbol representing three-way unity. Jones chose his symbol from Rudolf Koch’s “Book of Signs”, it is intended to symbolise a person who possesses both confidence and competence.

Jones is widely considered to be a highly influential and important bassist, keyboardist, and arranger in the history of rock music.
John married his wife, Maureen, in 1967, and they have been together ever since, currently residing in West London. They have three daughters: Tamara, Jacinda and Kiera.