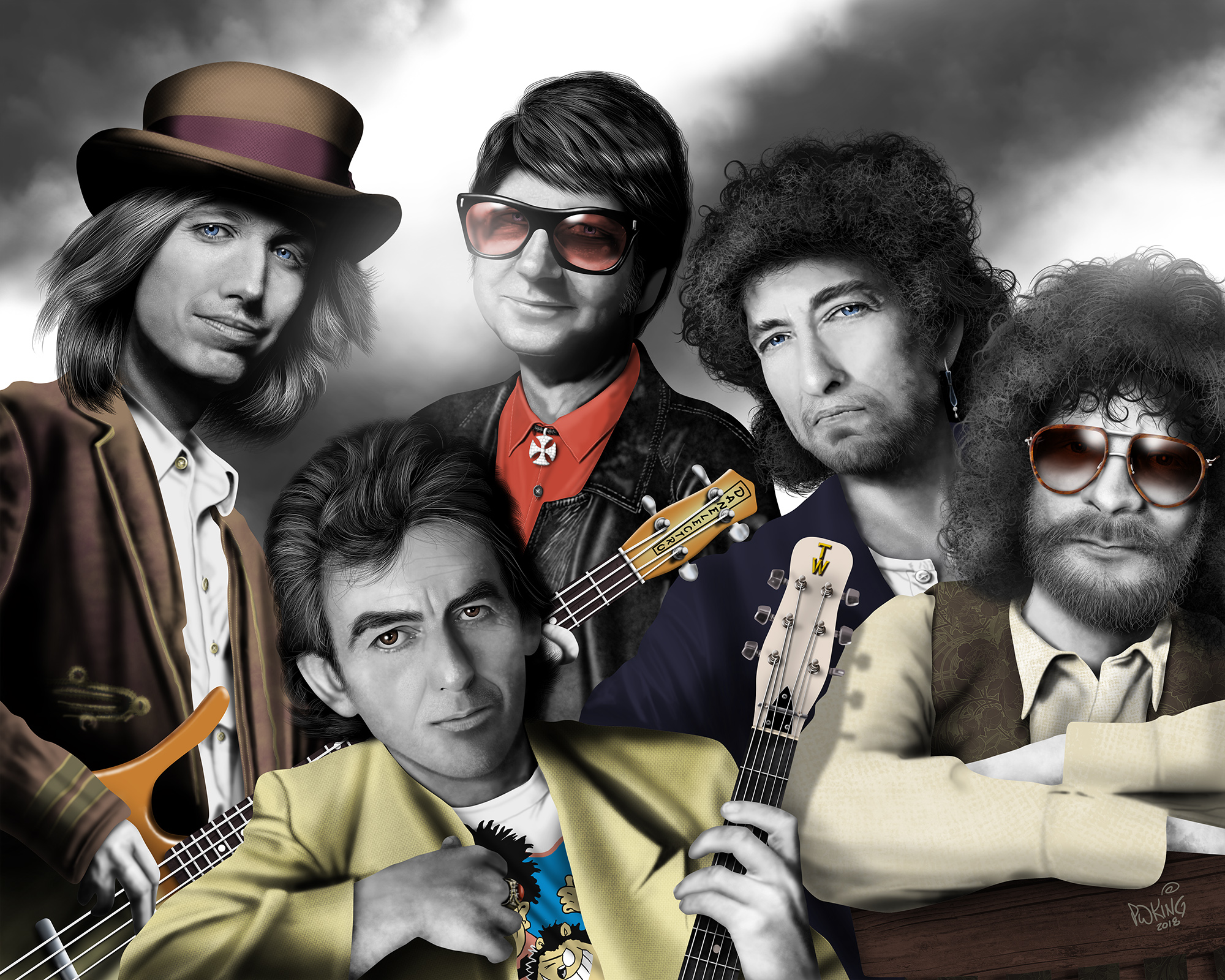 George Harrison first mentioned The Traveling Wilburys publicly during a radio interview with Bob Coburn on the show “Rockline” in February 1988. When asked how he planned to follow up the success of his “Cloud Nine” album, Harrison replied: “What I’d really like to do next is … to do an album with me and some of my mates … It’s this new group I got [in mind]: it’s called the Traveling Wilburys.

According to Jeff Lynne, who co-produced “Cloud Nine”, Harrison introduced the idea of the two of them starting a band together around two months into the sessions for his album.
When discussing who the other members might be, Harrison chose Bob Dylan and Lynne opted for Roy Orbison (his musical hero). The term “Wilbury” also originated during the “Cloud Nine” sessions. Referring to recording errors created by faulty equipment, Harrison jokingly remarked to Lynne, “We’ll bury ’em in the mix.” Thereafter, they used the term for any small error in performance.

The band came together in April 1988, when Harrison was in Los Angeles to oversee the filming of his HandMade production “Checking Out”. During a meal with Lynne and Orbison, Harrison asked Lynne to help him record the track and invited Orbison to attend the session, which he then arranged to take place at Dylan’s garage studio in Malibu since no professional studios were available at such short notice. Petty’s involvement came about when Harrison went to retrieve his guitar from Petty’s house and invited him to attend also.
Working on a song that Harrison had recently started writing, the ensemble completed the track, which they titled “Handle with Care” after a label on a box in Dylan’s garage.

The debut album was recorded primarily over a ten-day period in May 1988 to allow for Dylan’s limited availability as he prepared for his upcoming US tour. These sessions were held in the house of Eurythmics member Dave Stewart, in Los Angeles. The five band members sat in a circle playing acoustic guitars in Stewart’s kitchen; once each song’s basic track had been written and recorded there (with accompaniment from a drum machine), the group recorded their vocals in another room, usually after dinner each night.

The album was released on October 18, 1988 to critical success with hits such as “Handle With Care” and “End Of The Line”.
“The Traveling Wilburys Vol. 1” went triple platinum and was nominated for the Grammy Award for Album of the Year in 1989, won the 1990 Grammy Award for Best Rock Performance by a Duo or Group and helped revitalise the careers of Dylan, Orbison and Petty.

In March 1990, Harrison, Lynne, Petty and Dylan reunited to work on a second Wilburys album, which they intentionally misnumbered “Traveling Wilburys Vol. 3”. It was preceded by a non-album single, a cover of “Nobody’s Child”.

In the Rolling Stone Press book “The New Rolling Stone Encyclopedia of Rock & Roll”, the Traveling Wilburys are described as “the ultimate supergroup”, with a line-up that represented four eras of rock music history and included “three indisputable gods” in Dylan, Harrison and Orbison.